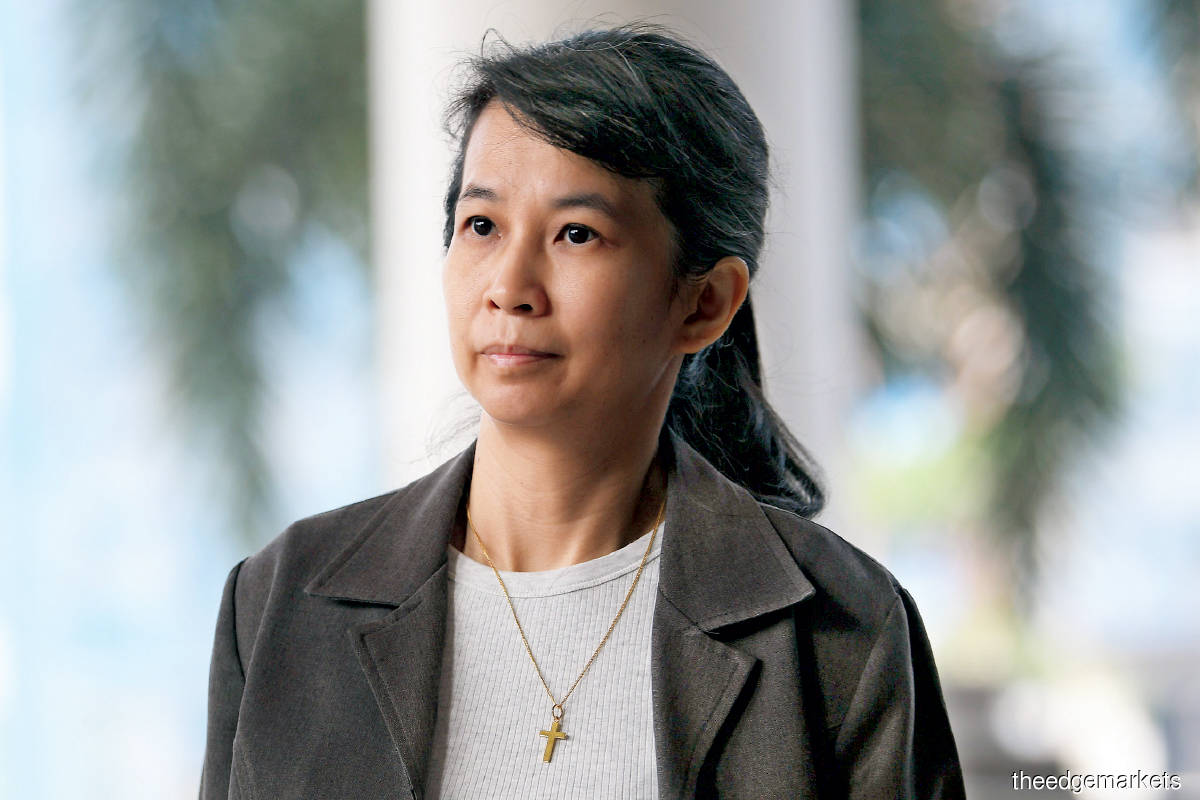 Yu suggested to Jho Low that the money be remitted in euros or British pounds (GBP). ‘... . We had problem with pies — they wanted to know detailed ingredients.’ (Photo by Suhaimi Yusuf/The Edge)

AN individual would be sent to physically bank “hundreds of thousands” of ringgit into the private AmBank accounts of former prime minister Datuk Seri Najib Razak in 2014 when they ran short, the High Court heard last week.

Managed by fugitive financier Low Taek Jho, or Jho Low, and the account mandate holder Nik Faisal Ariff Kamil, the accounts would occasionally go into overdraft, at which point someone would be sent to bank in “hundreds of thousands” of ringgit over the counter, AmBank’s former customer relationship manager Joanna Yu Ging Ping testified at Najib’s 1Malaysia Development Bhd (1MDB-Tanore) trial.

Upon her examination-in-chief by lead prosecutor Datuk Seri Gopal Sri Ram, Yu, 51, said that she would often inform Jho Low and Nik Faisal if Najib’s accounts fell short. She had previously testified that she had known Jho Low prior to his involvement with Najib and 1MDB, and that he had helped Najib open the accounts at AmBank. As for Nik Faisal, he was appointed by Najib as the mandate holder for the accounts. As such, she said she had no reason not to trust either of them.

Sri Ram: You referred to deposits in 2014. Besides Swift deposits, were there cash deposits?

Sri Ram: When the account fell short, you would inform Nik Faisal or Jho Low, and it was replenished by Mr Kee?

Sri Ram: How much?

Yu: I can’t remember. I would think hundreds of thousands. In essence, Najib is liable for his accounts despite appointing a mandate holder.

Sri Ram: After the mandate holder’s appointment, is the account holder relieved of liability to the bank?

Yu: No, the mandate holder is [only] responsible for specific things listed in the mandate letter.

Sri Ram: Would Najib still be answerable to the bank for the accounts?

Yu: They are still his accounts.

Yu also testified to BlackBerry Messenger (BBM) chats she had with Jho Low around that time. She explained that he would speak in code or use quirky nomenclature when referring to Najib or cash transactions that were coming into Najib’s accounts.

Because he was then Prime Minister, Najib was referred to as the popular Transformers main character “Optimus Prime” or “OP” in BBM chats, likely because they both had “Prime” in their names.

Yu was shown the BBM chats between her and Jho Low from Dec 8, 2014, indicating they were discussing the closure of one of Najib’s accounts with the bank.

The chat from Jho Low read: “Tell him (an unspecified AmBank personnel) OP said they will likely close the account by end-December due to his behaviour.”

Asked by Sri Ram who “OP” was in the BBM message, Yu said it was Najib and that Low had been very specific about keeping his name under wraps for these transactions.

Sri Ram then moved on to another BBM message in May 2014, in which Jho Low informed Yu that “big boss” had just called him, informing him that “15 American pies” were coming in.

When asked what “American pies” meant, Yu said: “I took it that US$15 million was being remitted into Najib’s account.”

Sri Ram: So, in other words, ‘American pies’ was code for American dollars?

Yu then replied to Low that “pies may be a problem” as, if they remitted the American pies, they would have to go through Wells Fargo Bank, which would ask for the details of the account holder.

She said that Wells Fargo had previously wanted full details of Najib’s account when it was remitting money to him.

Yu suggested that the money be remitted in euros or British pounds (GBP). “GBP for the moment. We had problem with pies — they wanted to know detailed ingredients.”

Another moniker used by Jho Low in the BBM chats was “Purple Dragon”. Jho Low had told Yu that Purple Dragon informed him that funds in Najib’s accounts were running low. However, she could not recall whom Jho Low was referring to.

Yu: I actually don’t know, that’s why I asked who it was.

Sri Ram: What is the answer?

Yu: It was very cryptic: ‘Colour plus animal is him’.

Sri Ram then asked her if cheques would be dishonoured if the account was overdrawn. However, Yu said that because Najib was the prime minister, the bank would chase for funds to avoid bounced cheques.

“It’s a prime minister’s account, so we would chase for funds to ask them to make good so that the cheques would not bounce.”

She confirmed that between June and December 2014, about RM49 million was transferred to Najib’s AmBank private account ending in “880”, which was codenamed AmPrivate Banking-1MY.

The prosecution in the trial said that it would prove that Najib had received RM2.28 billion of 1MDB funds which had entered his personal bank accounts from all four phases of the 1MDB scheme (referencing the misappropriation that Najib, Jho Low and associates carried out in 1MDB).

The RM49 million involves the fourth phase of the 1MDB scheme, in which 1MDB — through its subsidiary 1MDB Energy Holdings Ltd — obtained two loans totalling US$1.225 billion from Deutsche Bank Singapore in 2014, which were guaranteed by 1MDB Energy (US$250 million) and 1MDB Langat (US$975 million).

Through a series of transactions and botched transfers, Jho Low had seen to it that RM49 million entered Najib’s accounts.