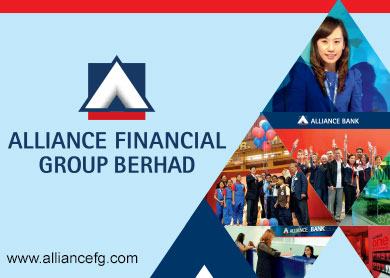 In a filing with Bursa Malaysia today, AFG attributed the growth in net profit to higher net interest income and other operating income during the quarter, but was partly offset by increased operating expenses.

The improvement in profit translated to higher earnings per share (EPS) of 11.9 sen for 2QFY15, compared with 8.6 sen a year ago.

The group said its net loans for 1HFY15 grew 15.5% y-o-y to RM34.1 billion, driven by residential and non-residential property financing as well as small and medium enterprise (SME) lending.

Going forward, AFG expects to perform satisfactorily for FY15, backed by the country’s projected gross domestic product growth of between 5% and 5.5% for 2015.

“However, we do expect top line revenue growth to remain a challenge with intensified competition for funding and increased volatility in financial markets.

“Notwithstanding this, we will continue to stay focused on key targeted customer and product segments, build strong customer relationships, as well as leverage on the group's infrastructure and multiple distribution networks for business growth,” said Leung.