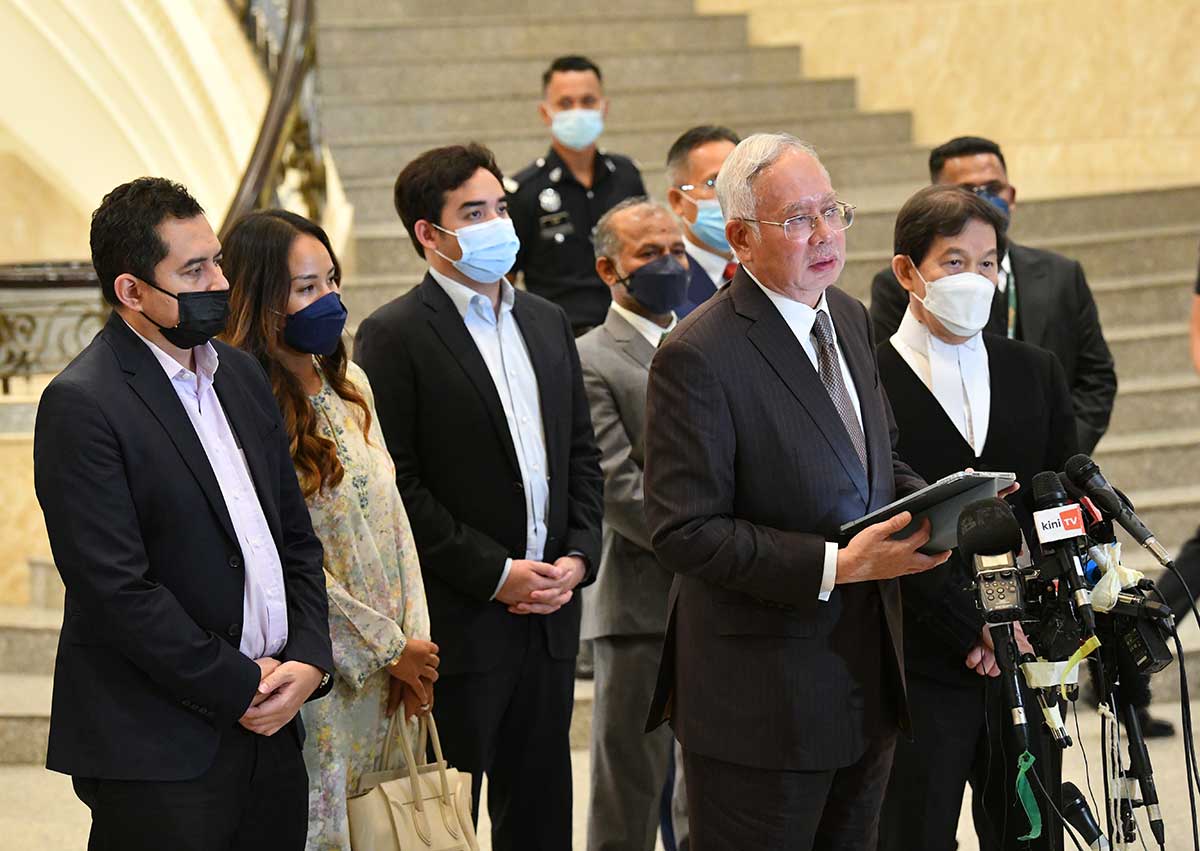 Najib talking to the press with Hisyam (on his left) after his SRC appeal hearing on Thursday. (Photo by Mohd Suhaimi Mohamed Yusuf/The Edge) PUTRAJAYA (Aug 18): After changing legal representation at the last minute, former prime minister Datuk Seri Najib Abdul Razak claimed on Thursday (Aug 18) that he has been left defenceless in his final appeal at the Federal Court over his SRC International Sdn Bhd conviction, where he was sentenced to a RM210 million fine and 12 years in jail.

Speaking at a press conference at the Palace of Justice here after his appeal proceedings had concluded for the day, Najib expressed disappointment at the court for not granting his request to adjourn the appeal and not allowing his lead counsel Hisyam Teh Poh Taik to discharge himself and for Najib to find a new counsel.

“I’m now left without — in effect and reality — without a defence counsel and that is the most unfortunate part, and I’m not able to present my defence and I believe I have a strong and credible defence,” he said.

“Hisyam, given reasonable time, he would defend me. Nevertheless, I do pray and I do hope for a fair trial and for justice to prevail,” he said.

This comes after the five-member apex court bench led by Chief Justice Tun Tengku Maimun Tuan Mat had denied Hisyam's application to discharge himself from the case.

Tengku Maimun said he had “not shown cause to discharge himself”.

Subsequently, Tengku Maimun ordered Najib’s SRC appeal to begin with the prosecution to start their submission. She noted that this would also provide Hisyam some time to prepare his submissions.

Earlier in Thursday’s hearing, Hisyam informed the Federal Court of his intent to discharge himself, reasoning that he was unable to continue serving as Najib’s defence counsel due to the scope and depth of the appeal.

This came after Najib’s bids to adduce fresh evidence, as well as for a three- to four-month postponement were dismissed by the five-member Federal Court quorum on Tuesday (Aug 16).

Just two days prior, the renowned criminal lawyer told the press that the defence would give serious thought and consideration as to their next course of action.

Hisyam and Messrs Zaid Ibrahim Suflan TH Liew & Partners had been hired on July 26, less than three weeks before the final appeal before the Federal Court, after Najib dismissed his initial counsels Tan Sri Shafee Abdullah and Harvinderjit Singh.

During the press conference, Najib urged the court to take “remedial measures” to grant an adjournment, as this is an “important case”.

“In such a high profile case, it is totally unprecedented that in a criminal case, the defence is left without [a] defence counsel. This is a very serious matter and I hope the court will take into account and make remedial measures at some point in time,” he said.

Najib is before the Federal Court to have his final appeal on the SRC matter, be heard. To recap, the former premier was found guilty on July 28, 2020, by the High Court of all seven charges in relation to SRC, a verdict which was upheld by the Court of Appeal on Dec 8 last year.

The charges involved one count of abuse of power in approving RM4 billion in loans from Retirement Fund Inc (KWAP) to SRC, and three counts each of criminal breach of trust and money laundering of RM42 million SRC funds. As a result of being found guilty of these charges, the High Court sentenced Najib to 12 years in jail and a fine of RM210 million.