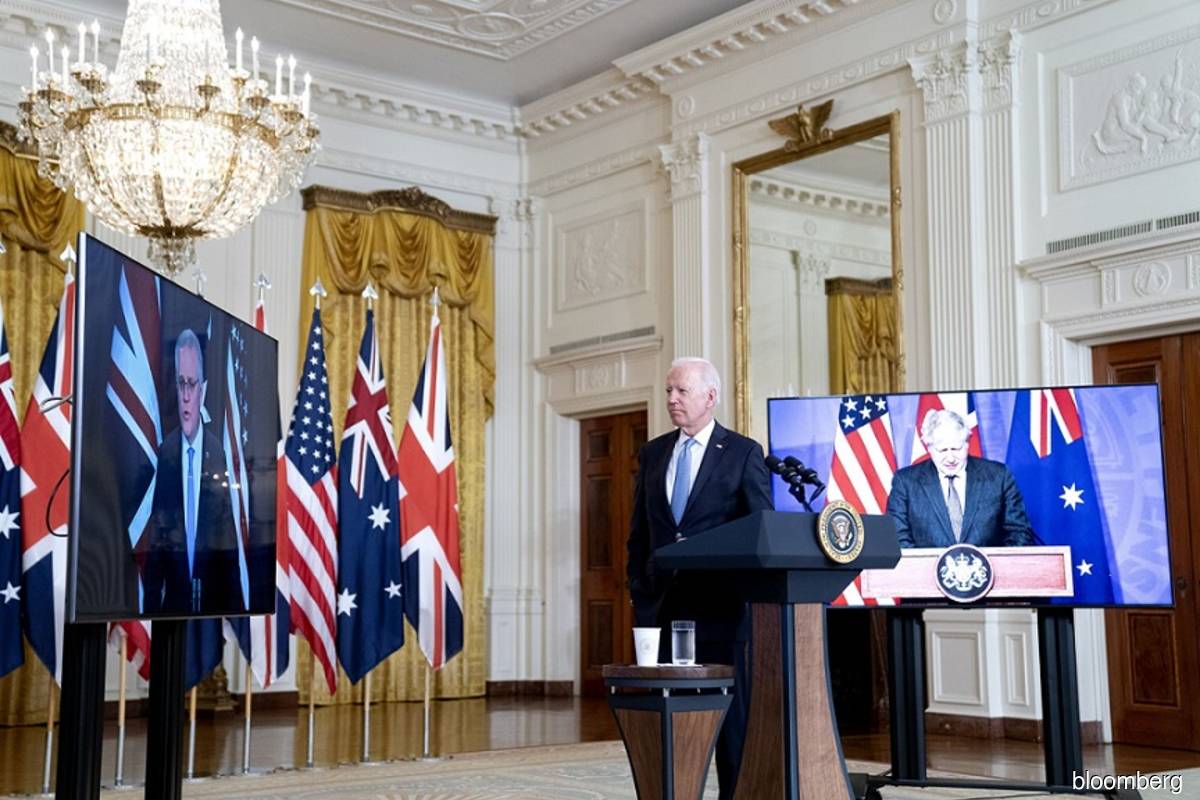 US President Joe Biden listens in the East Room of the White House in Washington, DC, US on Wednesday Sept 15, 2021, as Scott Morrison, Australia's prime minister, left, speaks via videoconference. Australia is joining a new Indo-Pacific security partnership with the US and UK that could pave the way for it to acquire nuclear-powered submarines, likely signaling the end of its deal with France to buy conventional craft.

(Sept 20): France isn’t the only country upset about a new security pact between the US, UK and Australia: Some Southeast Asian nations are also worried the partnership could provoke China and spur a regional arms race.

The so-called AUKUS partnership, which will help Australia acquire nuclear-powered submarines, prompted China last week to warn of an arms race in a region riven by maritime territorial disputes. Since then, two key members of the Association of Southeast Asian Nations — Indonesia and Malaysia — have voiced similar concerns.

That wariness in ASEAN is significant, particularly as both President Joe Biden and Australian leader Scott Morrison last week touted the arrangement as necessary for Indo-Pacific stability and mentioned a desire to work with the 10-nation bloc of Southeast Asian nations. Indonesia and Malaysia both have had run-ins with Chinese ships in the South China Sea, an expansive area where Beijing has made vast claims to hydrocarbon and fishing resources.

Asean has sought to balance ties between the world’s biggest economies, relying on US firepower to keep Beijing from establishing a regional hegemony even as they become more dependent on China for economic growth. AUKUS risks altering that equation, raising the odds of a US-China confrontation that could have economic and national security consequences.

“To prevent the outcome of Chinese regional hegemony, it is necessary for countries to take diplomatic and military actions, which will inevitably lead to greater tensions and military confrontation,” said Bonnie Glaser, director of the Asia Program at the German Marshall Fund of the US. “Southeast Asian countries may have to choose – which is the greater threat?”

As US-China relations unraveled in recent years, nations in the Indo-Pacific have found it increasingly difficult to navigate between the two superpowers. The Trump administration sought to force countries to avoid using Huawei Technologies Co’s equipment in 5G networks, while China has used trade reprisals — most prominently against Australia — to warn nations against challenging its interests.

Countries such as Singapore, Indonesia, Vietnam and the Philippines, in particular, may find it “less tenable” to have security ties with the US and also manage relations with Beijing, according to Natasha Kassam, a former Australian diplomat in China who is now director of the Lowy Institute’s public opinion and foreign policy programme.

“There is a significant risk that the AUKUS announcement will add instability to the region,” Kassam said. “Australia is betting that increasing capability and deterrence is going to secure a regional order favourable to its interests, but cannot discount the possibility of an arms race or alienating partners in the region.”

At Sydney Airport on Monday, Morrison said he was looking “to create a more secure and more stable world” before heading to Washington for talks with US President Joe Biden. He’ll also attend the first face-to-face leaders’ meeting at the White House of the Quad security partnership, which also includes Japan and India, and meet with the leaders of the European Commission and European Council.

While Morrison has spent most of the past few days seeking to placate France, Australia’s ambassador to Asean released a lengthy statement saying the country’s support for Southeast Asia’s centrality “remains as steadfast as ever” and that the new pact “will allow us to better share technology and capability”.

Indonesia was the first country in the region to criticize the arrangement, saying it was “deeply concerned over the continuing arms race and power projection in the region.” Morrison later after arriving in New York that said he had spoken to Indonesia’s President Joko Widodo to “reassure him, particularly about the issues on non-proliferation” and further explain the arrangements around AUKUS.

Malaysian Prime Minister Ismail Sabri Yaakob said he was worried AUKUS could provoke other powers to act more aggressively, especially in the South China Sea, while Singapore merely said it hoped the deal “would contribute constructively to the peace and stability of the region and complement the regional architecture.”

Philippines Defense Secretary Delfin Lorenzana told his Australian counterpart in a call that they acknowledged Canberra’s right to acquire the new subs, while stressing Manila wanted good defense relations “with all countries in the region”.

North Korea also chimed in, warning AUKUS would trigger a “nuclear arms race” despite its own pursuit of atomic weapons that has threatened stability in the region for years.

Rory Medcalf, a former Australian diplomat who wrote the book “Indo-Pacific Empire,” said he suspected the agreement was “something Asean can live with.”

“I think we will find that major players like Japan, India and South Korea are all welcoming of AUKUS,” said Medcalf, a professor at Australian National University. “Hypocritical criticism from China and North Korea plus predictable concerns about stability from Indonesia and Malaysia — this does not add up to a regional backlash.”

India will have to take into account another navy that operates nuclear-powered submarines in the Indian Ocean and “this would enhance the sea-denial capabilities of the Quad,” said C. Uday Bhaskar, a retired commodore and honorary fellow with the National Maritime Foundation. The Quad, which prioritizes countering China’s growing military power, will meet in Washington this Friday.

“There is, however, likely to be a division of responsibility, for India it would mean that areas from Persian Gulf to Malacca Straits would become the primary area of responsibility whereas the vast waters of the south Indian Ocean can be looked at by others,” Bhaskar added.

The more negative statements from Southeast Asian nations could be a way of “expressing concern about AUKUS” to underscore an independent foreign policy, while also seeking to benefit from security cooperation with Australia and the West, said Shahriman Lockman, a senior analyst at the Institute of Strategic and International Studies in Malaysia. He said senior Malaysian officials have told him a stronger Australian navy would benefit the country.

Indonesia’s concern over AUKUS represents broader worries about great-power politics that has left it feeling powerless, according to Evan Laksmana, a Jakarta-based senior research fellow at the Lee Kuan Yew School of Public Policy.

“The more these types of moves happen in the region that sort of sidelines Asean or sidelines Indonesia, the more that impression of Indonesia being a strategic spectator is sort of reinforced,” he said. “And that’s not a nice feeling to have, but we also know we can’t offer anything else.”