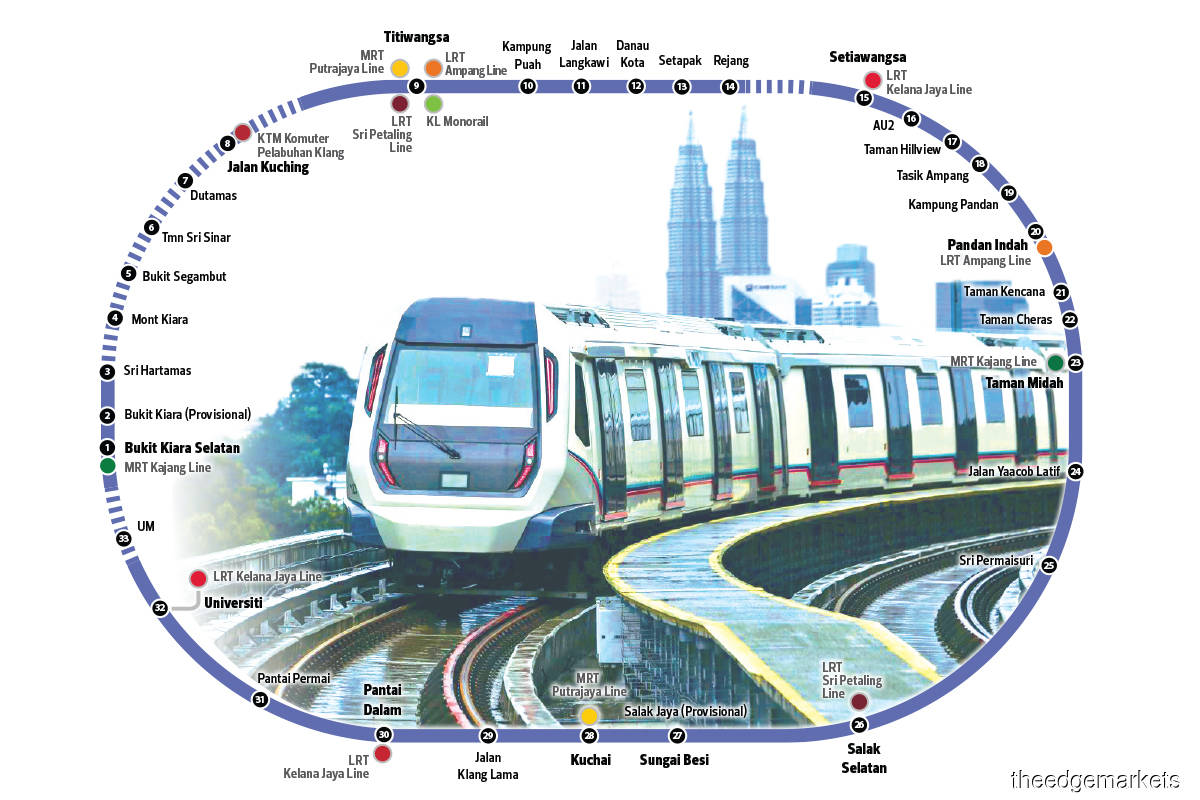 THE Mass Rapid Transit Corporation Sdn Bhd’s (MRT Corp) office in Bangsar was a hive of activity last week as dozens of contractors joined in online via Zoom to get a glimpse of the country’s biggest civil infrastructure project.

Briefings on the tender for the MRT3 Circle Line, pegged at RM50 billion including interest cost, kicked off two weeks ago. Consultants were the first batch to be called in a fortnight ago. Then, the contractors were briefed last week.

Taking place after a period of scarcely any large infrastructure contracts being dished out since 2018, construction companies are understandably drooling over the MRT3 project. However, unlike the previous two lines of the Klang Valley MRT project, the Circle Line comes with unique challenges.

As a result, there could be a smaller pool of eligible contractors bidding for the main construction packages compared with the previous two lines, executives of several construction companies tell The Edge.

“This MRT3 project is only for the big boys,” says an executive with a mid-sized construction company. “Only those with big balance sheets are able to bid for the main packages, due to the requirements put up by MRT Corp.”

That is because MRT Corp — tasked with the development of urban rail infrastructure in the country — requires contractors or consortiums that secure the main civil work packages to fund the jobs themselves for the first two years of the project. Each bidder will have to prove that it can fund at least 10% of the package that it is bidding for.

And with the contracts running into tens of billions of ringgit, just 10% of the package means that at least RM1 billion will have to be provided. Of course, the funds will be reimbursed by MRT Corp at a later stage, using the allocation provided by the Ministry of Finance.

On May 27, MRT Corp issued a notice of tender for three main construction packages for the MRT3. The packages are for the depot, civil works above ground with a short underground section and a final package that entails mainly tunnelling works. According to the notice, bidders must have a paid-up capital of between RM100 million and RM300 million, depending on the package they are bidding for.

The depot segment of MRT3 comes with some elevated portions and is estimated to be about 6km in length, linking Pandan to Jalan Cheras.

According to MIDF Research, the depot package is estimated to be valued at RM2.79 billion. This means the contractor that wins the bid will have to fork out at least RM280 million to fund the construction for the first two years.

MIDF estimates that the above ground civil works will be about RM13.94 billion. This section entails 27km of elevated structure and 1.2km of underground infrastructure.

The final section, which involves 10km of underground works with stations and 6km of elevated section, is estimated to be worth RM14.29 billion.

“Only the big boys can bid for the main construction jobs. This is different from the past, when we saw mid-sized contractors winning some work packages as the contract award structure was different,” says another executive.

For MRT3, only three contractors or consortiums will be awarded the main civil works packages. They, in turn, will appoint sub-contractors and be responsible for the progress of the works for their respective packages.

“This time round, MRT Corp strategically transfers the responsibility for the contracts directly to a few big contractors. This includes financing and guarantees on completion,” says an observer. Apart from the construction works, MRT Corp has put out to tender the project management consultancy (PMC) services for MRT3. Unlike for the first two MRT lines, the PMC this time round will oversee the implementation of the jobs by the main civil works contractor, as well as by the systems turnkey contractor.

According to a consultant who attended the briefing on May 13, the scope and responsibility of the PMC is bigger than in previous MRT jobs. He contends that the scope of work includes taking responsibility for the completion of the jobs by the contractor, or they will be slapped with liquidated ascertained damages (LAD).

“Consultants cannot absorb the completion risk liability because they don’t appoint the contractors. Even the alignments are not firmed up yet, but the tender [for the civil works packages] is out,” says a consultant who was planning to bid for the PMC job.

“What if there are changes? Who would have to bear the cost of the variation orders?”

MRT Corp did not respond to questions for this article.

Some contractors also point out the practice of calling for tender before finalising the alignments through public viewing and feedback. That is because if the contracts have been awarded and signed, and there are changes to the contracts, variation orders (VO) will have to be issued.

While the contractors may not have any problem handling VOs from MRT Corp, at the end of the day, any VOs will lead to higher costs for the government.

Nevertheless, an executive with a large construction company that has participated in the last two MRT projects says the alignment of the MRT3 is more or less finalised. “That is because the MRT3 will be mostly within Kuala Lumpur and its periphery, which means there will not be much room to manoeuvre.”

The MRT3 alignment will go through highly populated areas in KL in a circle loop, interconnecting with other existing rail transport lines at a number of stations. The stations that will integrate with other lines include Titiwangsa, where there will be an interchange with the Sri Petaling and Ampang LRT lines, the Kajang and Putrajaya MRT lines, and the KL Monorail.

The interchange stations ensure interconnectivity between MRT3 and the rest of the rail transport system in the Klang Valley, providing a more efficient and seamless journey for travellers.

This means that once the MRT3 is fully completed in eight years, the commercial developments in Dutamas, Mont’Kiara, Sri Hartamas and other areas that are connected with the lines could benefit from higher footfall and demand from the public (see “Key beneficiaries of MRT” on Page 67).

One major real estate development that has apparently been left out from the MRT3 alignment is Bandar Malaysia.

Observers point out that while Bandar Malaysia already has two MRT stations on the Putrajaya Line, the stations are not connected to the MRT3 or other lines. And this could impact the attractiveness of the development as a place for people to live, work and play.

“Initially, Bandar Malaysia was supposed to be a development that is well connected with the public transport system, so that people from all over the Klang Valley could either make it their home or work there,” says an observer of the property development sector.

“Now that the KL-Singapore high-speed rail is in limbo and Bandar Malaysia is left out of the MRT3 project, will the development have the same value proposition as previously touted?”

The provisional Bandar Malaysia Utara station for the MRT Putrajaya Line could one day see integration with the KTM Komuter line and both the KLIA Express and KLIA Transit, as well as the terminus for the HSR — if the project finally sees the light of day.

A property development consultant says that while it would be good to have an MRT3 station in Bandar Malaysia, the development will still be well connected, due to potentially having the HSR terminus in the future, two MRT stations and 13 direct and indirect highways and major roads linking it with the rest of the Klang Valley. “Regardless of whether the MRT3 will be in Bandar Malaysia, there will most likely be a seamless link to an interchange nearby,” he adds.

If there are changes to the alignment and MRT Corp decides on having a station in Bandar Malaysia, the cost of the project will increase and lead to VOs.

According to MRT Corp’s website, public inspections of the MRT3 alignment and the location of the stations will commence in the third quarter of this year, while the contracts will be awarded in the fourth quarter.

What the parameters for the tender mean

Based on the requirements of the tender, MRT Corp has some conditions in place restricting contractors “with connections” from bidding for the project. The main criteria is that contractors must have the balance sheet to undertake the jobs.

Second, foreign contractors are only allowed to be part of a consortium for the underground package of the MRT3 project. They are not allowed to participate in the above-ground segment, which means more opportunities for the local construction industry.

Third, the bidders or consortiums need to have a credible track record.

For both above-ground and underground packages, MRT Corp requires bidders to have experience in having done at least three tunnel-boring jobs where the diameter was greater than 6m. Apart from MMC-Gamuda and IJM Corp Bhd, there are hardly any other local contractors with such tunnelling track record.

MMC-Gamuda’s track record includes the construction of the SMART Tunnel in the early 2000s and the tunnelling jobs for the first two MRT lines. Gamuda itself had the experience of urban tunnelling when it participated in the Kaohsiung MRT project in Taiwan.

IJM Corp — through its subsidiary IJM Construction, in a consortium with UEM Builders Bhd, Shimizu Corp and Japan-based Nishimatsu Construction — participated in the construction of the 44.6km Pahang-Selangor Raw Water Tunnel between 2010 and 2013. However, the consortium used a tunnel-boring machine with a diameter of 5.23m.

In March 2018, the PDP for LRT3, Malaysian Resources Corp Bhd and George Kent (MRCB-GK), awarded IJM a tunnelling job in Shah Alam worth RM1.12 billion. After the project was scaled down when Pakatan Harapan came to power, the tunnel was cancelled and the two parties could not agree on the pricing for the new scope of works.

In June 2019, IJM announced that MRCB-GK had terminated the agreement and stated that doing away with the tunnelling section of the LRT3 was part of its measures to reduce cost.

Back to the MRT3. If all the conditions are followed to a tee, a much smaller pool of contractors will be eligible to bid for the jobs. And unlike MRT1 and MRT2, which involved multiple contractors, there will be three main contractors to undertake the civil works of the biggest infrastructure project by cost in recent years.

The tender for the systems contractor will be called later.

It has only been three months or so since the government approved the MRT3 project in March. The approval came with a distinctly new way of implementing the project, whereby MRT Corp would take on a more active role as PDP. It would be responsible for completing the project on time and ensuring integration between the civil and systems contractors.

The winners of the contracts to be dished out are likely to be announced by the end of the year. As the saying goes, watch this space. There will be a lot of corners to negotiate in the twists and turns of the project until the jobs are awarded.