CPO prices to be supported at current levels in near term, say analysts 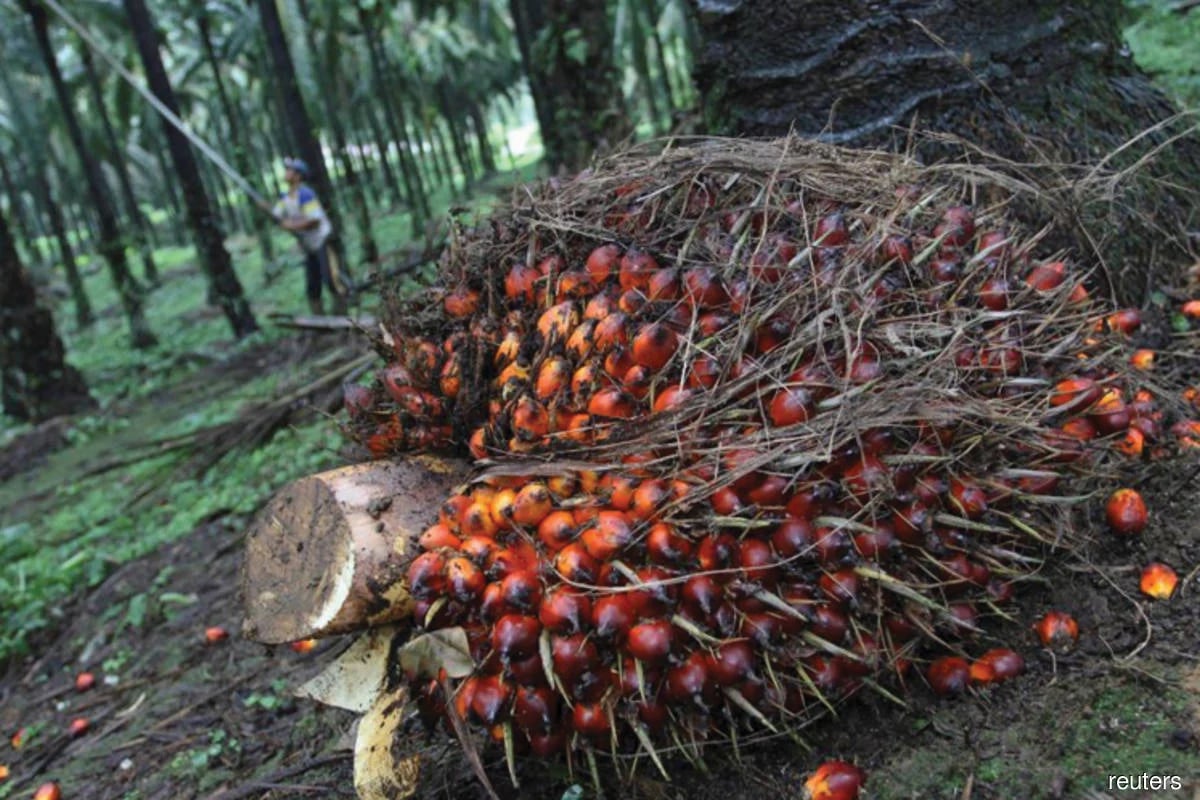 ANALYSTS are expecting crude palm oil (CPO) prices, which have risen in recent weeks, to hover at its current level in the near term amid seasonality factors, competitive pricing compared with the soybean oil market, decent export performance, ongoing geopolitical tensions and waiver of Indonesia’s CPO export levy.

“At the current level, CPO prices are better than this year’s low, yet not quite the strong prices in the first half when plantation stock values were strong with CPO prices rallying,” CGS-CIMB Securities head of Malaysia research Ivy Ng Lee Fang tells The Edge.

Analysts observe that a number of factors account for the higher CPO prices in the past month such as palm oil’s big discount to competing vegetable oils like soybean oil, as well as concerns about the availability of CPO supply.

“Flooding in Kalimantan has worried watchers that supply coming to market could be affected. In addition, there were earlier concerns of high inventories in Indonesia but those concerns appear to be alleviated since the country’s export measures have been relaxed,” says Ivy.

Indonesia, the world’s biggest producer of palm oil, started waiving the levy imposed on exports of palm oil products from mid-July to help reduce a stock glut that accumulated after a three-week export ban in late April, which was designed to stabilise local cooking oil prices.

“Therefore, it appears that Indonesia is able to reduce its stockpile convincingly. Although that comes a little at the expense of Malaysia’s [growing stockpile], Indonesia’s reduced inventory has been a relief to the market concerned about price pressures. The combination of these factors has helped [CPO] prices recover about 20% from a month ago,” says Ivy. Analysts are expecting CPO prices to be supported at their current levels as Malaysia and Indonesia enter the peak production months of October and November.

“Prices will hover around this level as there are concerns about demand being affected by a global [economic] slowdown. Supply is not plentiful, yet sufficient, while demand may not be robust owing to the global slowdown, which will keep prices at a discounted level,” says Ivy, who has forecast an average price of RM3,800 a tonne in 2023 after this year ends at “around the RM5,000 per tonne level based on Malaysian Palm Oil Board (MPOB) data”.

IcebergX Sdn Bhd palm oil trader David Ng, who was previously a derivatives specialist at Phillip Capital Sdn Bhd, believes the weaker ringgit against the US dollar will also play a part in determining CPO prices.

“However, rising output and the overall high stock situation, which surpassed the two million mark, may put additional pressure on any price gains going forward. Furthermore, ongoing geopolitical tensions and Indonesia’s CPO levy may influence price performance in the near term,” cautions David, who attributes CPO’s price rally above RM4,000 a tonne for the past couple of weeks to the industry’s “better-than-expected export performance.

In the near term, David expects CPO prices to be supported at about RM4,000 to RM4,700 a tonne given the prospect of lower CPO production in the final quarter of the year and the first quarter of next year.

Ivy points out that typically in a period where the US dollar is stronger, commodity prices tend to decline on weaker consumer demand from various countries due to a lack of affordability.

“If their currency depreciates, they won’t be able to afford [the higher] US dollar. Therefore, [poorer] nations will cut back on [palm oil] demand unless the prices come down,” she says, noting that palm oil prices have decreased amid the strengthening of the greenback.

Ivy explains that the benefit of a stronger US dollar to palm oil players is from a cost rather than revenue perspective. “Labour cost, for instance, which is a big component of cost, when translated to US dollars may become more competitive than other producers such as US-based farmers. In this sense, there may be a slight benefit, but not from a revenue standpoint.”

“Palm oil stocks rose to just over a three-year high as widely expected, although at a much slower pace than expected. This is mainly due to a 50% fall in imports and a slower increase in production. The report is considered slightly bullish as supply failed to see a sharp surge as initially expected, while ember production appears to be very strong after rising more than 30% in its first 10 days,” Singapore based Palm Oil Analytics owner and co-founder Sathia Varqa tells The Edge.

He says Malaysia’s palm oil export prospects will remain strong, buoyed by the weaker ringgit; wider discount to its nearest substitute, soybean oil; uncertainty over sunflower oil supply from the Black Sea grain corridor initiative (where global security depends on the renewal of the UN-brokered deal allowing Ukrainian grain exports), given the fragility of the situation; and on its ample availability.

While Varqa believes that CPO prices will remain supported at RM4,000 per tonne with a strong pick-up of more than 30% in the first 10 days of November, he warns that prices may plummet in the second quarter of next year amid a pick-up in production and waning demand from the Chinese New Year season.

He says a big unknown is China’s reopening plans. “The nation has been on a trajectory of short, swift, sporadic lockdown measures to tackle the Covid-19 virus. [But] there are signs of China gradually increasing its palm oil intake.

“If the world’s second most powerful economy opens up, Malaysia’s palm oil export rise will be sustained, stocks will trend lower and prices may stay above RM4,000.”

Varqa forecasts Malaysia’s CPO production to range between 18.5 million and 18.9 million tonnes next year, while Indonesia’s will hit 51 million tonnes, up 3% year on year. “It is uncertain whether Malaysia’s new government [post-15th general election on Nov 19] will be able to sort out the hiring of foreign workers,” he says.

The Malaysian Palm Oil Association has reportedly estimated opportunity losses in the industry of more than RM20 billion by year end owing to the shortage of workers, which “may cause the country to end the year with lower total CPO production of 18 million tonnes”.

That will lead to a third consecutive year without growth in CPO production in Malaysia, contrary to earlier forecasts of higher CPO production figures for 2022, with significant crop losses, ranging from 15% to 25%, or higher, the association said.

“Most planters are saying the labour situation has improved but it will take time to normalise. There is improvement but it is not back to optimal levels, which if all goes well can only be achieved in the middle or second half of next year,” says Ivy.

“Relief will come in the second quarter of next year at the earliest, and in stages, as it takes time to obtain workers and train them,” she adds, noting that the incoming workers could lift CPO prices.

IcebergX’s David points out that new policies affecting the soybean industry in Brazil will likely have an impact on the commodity’s price, which is closely linked with CPO prices.

“Lula is a big fan of biofuels. So, upgrading the biodiesel mandate means greater use of soybean oil in biodiesel blending. This is supportive of [soy] bean oil and palm oil usage,” says Varqa.

Meanwhile, CGS-CIMB Research’s Ivy is of the view that local plantation companies’ earnings will peak in the second and third quarter of next year amid lower CPO prices and higher fertiliser costs as well as the higher minimum wage, which will affect profitability. “As profitability weakens on a sequential basis, this may not excite investors to stay invested in the sector in the near term,” she says.

CGS-CIMB Research has a “hold” call on most plantation stocks under its coverage, ascribing “buy” calls only to Kuala Lumpur Kepong Bhd, on the premise that the company may potentially achieve synergies from its acquisition of IJM Plantations Bhd, and Hap Seng Plantations Holdings Bhd as a “pure value” investment.

“At [the latter’s] current trading prices, the market has valued its estates at a low enterprise value per hectare. If it is too cheap, that could be a potential discovery of value if there is an interested buyer and willingness to sell [the estates], which may catalyse the stock,” says Ivy.

MIDF Research has a “buy” call on Sime Darby Plantation Bhd, with an unchanged target price of RM6.30, as it believes the integrated player’s manufacturing segment, “which accounts for roughly 17% of group profit, will help the company withstand the decline in average selling prices for CPO and lower the volatility of its earnings”.