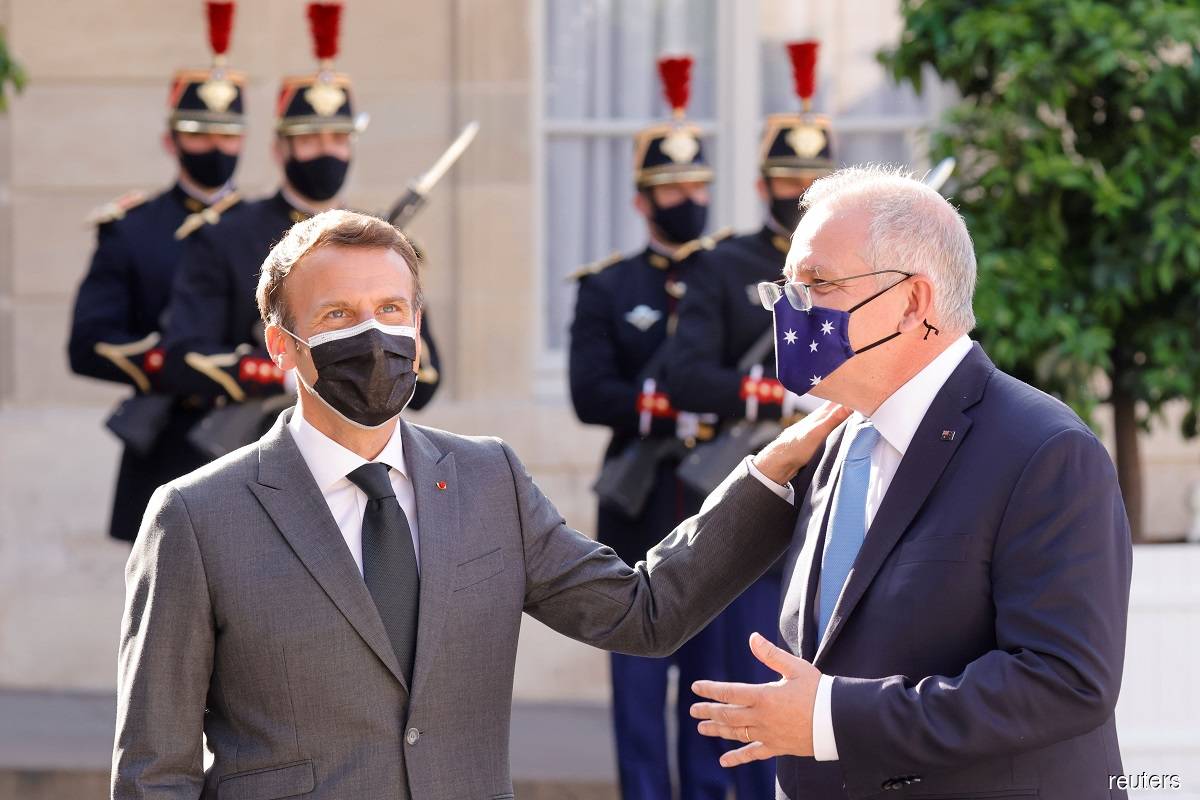 PARIS (Sept 20): France began doubting Australia's commitment to a US$40 billion submarine order in June and President Emmanuel Macron was only informed by Canberra of the deal's collapse in writing hours before it was announced, a French presidency official said.

The official said there had been no hint of the contract cancellation when Macron met Australian Prime Minister Scott Morrison in Paris in mid-June, shortly after a meeting of G7 leaders in Britain.

"We started hearing echoes of Australian concerns about the execution of the contract from June," the Elysee Palace official told Reuters on Monday.

Australia said last week it was cancelling the contract for conventional submarines from France and would instead build at nuclear-powered submarines with US and British technology after striking a security partnership with those countries.

Canberra's move enraged Paris, triggering an unprecedented diplomatic crisis that analysts said could do lasting damage to US alliances with France and Europe. It has also riled China, the major rising power in the Indo-Pacific region.

France discussed the contract for the diesel-powered submarines with its allies at the G7 summit, the official said. Australia is not a G7 member but was invited by Britain as a guest country.

On June 15, when Macron hosted Morrison for dinner, Morrison set out Australia's concerns but there was no suggestion that he was considering tearing up the contract, the official said.

"Morrison said nothing to suggest this and they agreed to continue working. The president later wrote at length to Morrison to address his concerns," the official continued.

For months, Australia had issues over the delivery time and cost of the project, but it was not clear what concerns Morrison presented to Macron.

On Sunday, Morrison said Australia had formed the view that the French Attack-class submarines were not going to meet Australia needs for protecting its sovereign interests.

A second Elysee official said Canberra did not once indicate it was studying an alternative to the French deal.

France also sought answers from the United States but received none, the first official said.

Morrison informed Macron that the deal was dead in writing hours before the official announcement.

The United States has sought to assuage the anger in France, a NATO ally. The French government spokesman said on Sunday that Macron would have a call with US President Joe Biden "in the next few days".

Australia's trade minister said on Monday he would seek a meeting with France to ease tensions and was confident it would not cloud EU-Australia trade talks.

Paris has recalled its envoys to Washington and Canberra for consultations.