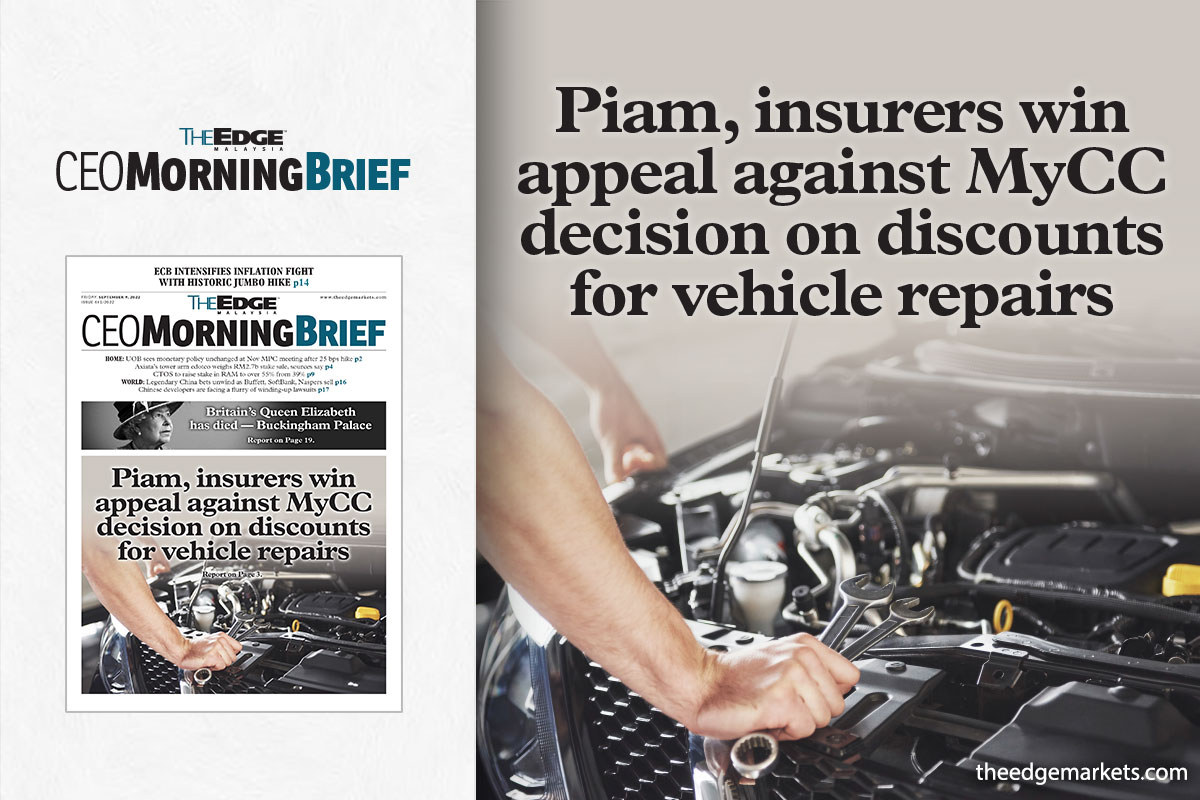 KUALA LUMPUR (Sept 8): The Competitions Appeal Tribunal (CAT) has allowed an appeal by Persatuan Insurans Am Malaysia (Piam) and its 22 members against the Malaysian Competition Commission's (MyCC) decision two years ago, deeming an agreement on the application of trade discounts on automotive parts prices and hourly labour rates for motor vehicle repairs by workshops under the PIAM Approved Repairers Scheme (PARS) as a breach of the Competition Act 2010.

The three-member CAT tribunal, in unanimously allowing the appeal, found that MyCC had committed a fundamental error in its finding on law and facts.

“MyCC's reliance on Section 4(2)(a) of the Competition Act 2010 as the deeming provision to find the Piam members circular 132 had infringed the prohibition under Section 4(1) of the Act is flawed.

“The tribunal finds that the Piam members circular 132 in 2011, did not infringe Section 4(1) of the Competition Act 2010. Hence it follows that there is no finding of liability on the part of the insurers and Piam under the anti-competition law,” stated the decision sighted by theedgemarkets.com which was delivered on Sept 2.

The tribunal is chaired by Datuk Dr Choo Kah Sing, while its two other members were Datuk Asmabi Mohamad and Datuk Dr Victor Wee Eng Lye.

On Sept 30, 2020, Piam and its members expressed disappointment with the final decision made by MyCC on Sept 14, 2020 against the association and its 22 general insurers members.

Piam said MyCC found that the association and the insurers had infringed the Competition Act 2010 in relation to the arrangement between Piam and the Federation of Automobile Workshops Owners' Association of Malaysia (Fawoam) on minimum hourly labour rates and spare part prices of six commonly used types of vehicles, namely Proton, Perodua, Naza, Nissan, Toyota and Honda.

Central to the issue is circular 132 issued by Piam in 2011, where it states that the survey findings indicated overwhelming support from the Claims Management Subcommittee's recommendations for parts trade discounts and labour rates.

The subcommittee recommended parts trade discounts of 25% for the six vehicle makes of Proton, Perodua, Nissan, Toyota, Honda and Naza and 15% for the Proton Saga base line model, and labour rates of RM30 per hour, but Piam members may apply either the Thatcham Repair Times or Opinion Times options.

For special cases, where repairers have to purchase parts with low trade discounts due to urgency, or they are unable to offer trade discounts of 25%, insurers may consider the merits of each case, subject to verification from appointed adjusters and proof of purchase invoice.

Reason for overturning the MyCC decision

CAT, in overturning the MyCC decision, found that it is inaccurate to state the parts trade discounts and labour rates were determined by insurers.

“The parts trade discount and labour rates were negotiated and determined by insurers (through Piam), and PARS workshops through Fawoam. Lastly, it is inaccurate to conclude that the insurers would have the final say over the approval of repair costs, as if the insurers arbitrarily determine the final amount to be paid.

“Insofar as to the determination of parts trade discounts and labour rate charges are concerned, they do allow the PARS workshops room to negotiate for a better rate for the discount for spare parts (a lower discount rate) and higher labour costs (above RM30 an hour). There is nothing to stop them (the workshops) from negotiating a better profit. Hence, it is inaccurate to suggest the PARS workshop must accept what is offered by the insurers,” the CAT decision stated.

They also agreed with Piam's submission that there is no market for fixing the minimum labour rate for car repairs and trade discounts of spare parts.

“This is not a case that PARS workshops must give a discount rate of 25% for spare parts of certain particular car models,” the tribunal said.

Meanwhile, CAT said RM30 per hour is the minimum rate insurers can ask for PARS workshops to charge labour.

The fixing of the minimum labour rate, the CAT said, benefits the PARS workshops, instead of insurers.

The terms and consequences for the part trade discounts and minimum labour rate give the PARS workshops the edge to negotiate a better pricing of goods and services which they are selling and providing to the insurers, CAT added.

“The PARS workshops are at the upper hand to gain better profit than the insurers. The real effect (of the agreement) is that the insurers do not have control over the pricing of spare parts and the labour rate charges,” it said in the 80-page judgement.