Shafee accuses MACC of wiretapping Najib for almost a year 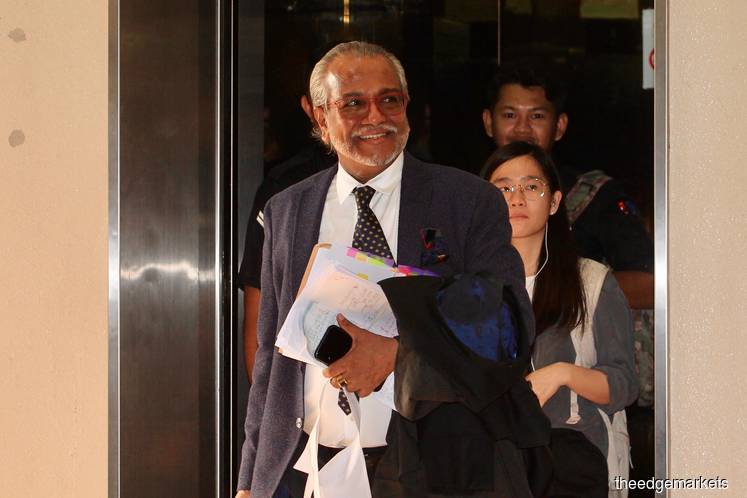 Speaking after proceedings of the SRC International trial today, Shafee alleged that when the MACC wiretapped Najib, it ignored due process and did not follow the adequate approval processes.

This is regarding the audio recordings released by the MACC in January of phone conversations implicating Najib, his wife Datin Seri Rosmah Mansor and other senior civil servants in schemes to over up the 1MDB and SRC International scandals.

According to Shafee, there are four entities that are allowed to wiretap in the country, including the MACC; however, they need to get the consent of the Attorney-General’s Chambers before it is done.

“No. The MACC did not ask me for permission to wiretap. I never had any knowledge of these so-called audio recordings,” he testified in court.

Shafee claimed that the MACC is the culprit for wiretapping VIPs illegally.

“During his (Apandi) tenure of office until 2018, not a single MACC commissioner had asked him for permission to do wiretapping, which means MACC did this illegally… They wiretapped him (Najib) for the whole year and selected these nine recordings to release,” he said.

“They did it without authority,” he added.

Shafee said that he was not afraid to make these allegations and he dared the MACC to sue him.

“The MACC are the culprits, I want them to sue me. I invite them to sue me,” he said adding that the MACC had a special interest in this case.

Shafee also attacked Latheefa by calling her a political appointee.

“The fact that she resigned says a lot,” Shafee said about her.

In a statement announcing her resignation last Friday, Latheefa said she was quitting her post to resume human rights advocacy work and denied that she was pressured to quit.

Earlier in the morning, Latheefa and Shafee had squared off again in court at the trial.

Shafee eventually grew irate and suddenly ended the examination in-chief of his witness.

Shafee was trying to ask her about the asset recovery efforts done by MACC concerning the RM4 billion loans from Retirement Fund Inc (KWAP) to SRC that was alleged to have been transferred to and were frozen at a bank in Switzerland.

Latheefa, who is a subpoenaed defence witness, challenged Shafee’s line of questioning and refused to answer the questions as she claimed that it would hinder ongoing MACC investigations.

She contended that she was only called on to be the defence witness to testify on the nine audio recordings of conversations revolving 1MDB investigations in 2016.

Shafee (irritated): 'Yang Arif' (Your Honour), I am done with this witness! She is not answering my questions. She is not cooperative. Although she is my witness, I have no further questions. We have the Attorney General (Tan Sri Tommy Thomas, who resigned at end-Feb) who made a bold statement at the beginning of the trial about the money in Switzerland, but she’s not answering. I’m done.

Latheefa testified that she was unable to share development on efforts of asset recovery linked to 1MDB and SRC, when Shafee asked her on the status of those initiatives.

"Am I being cross-examined or being questioned on the audio recordings? That was what I was told," she asked during proceedings.

Latheefa also reiterated that Shafee should not be asking her about the KWAP money recovery effort as she was not part of the investigation team that was probing the issue.

Najib is on trial over seven charges related to SRC, three of which are for alleged criminal breach of trust over a total RM42 million of SRC funds while entrusted with its control as the prime minister and finance minister then.

Three of the charges are for alleged laundering of the RM42 million, and the last is for allegedly abusing the same positions for self-gratification of the same sum.