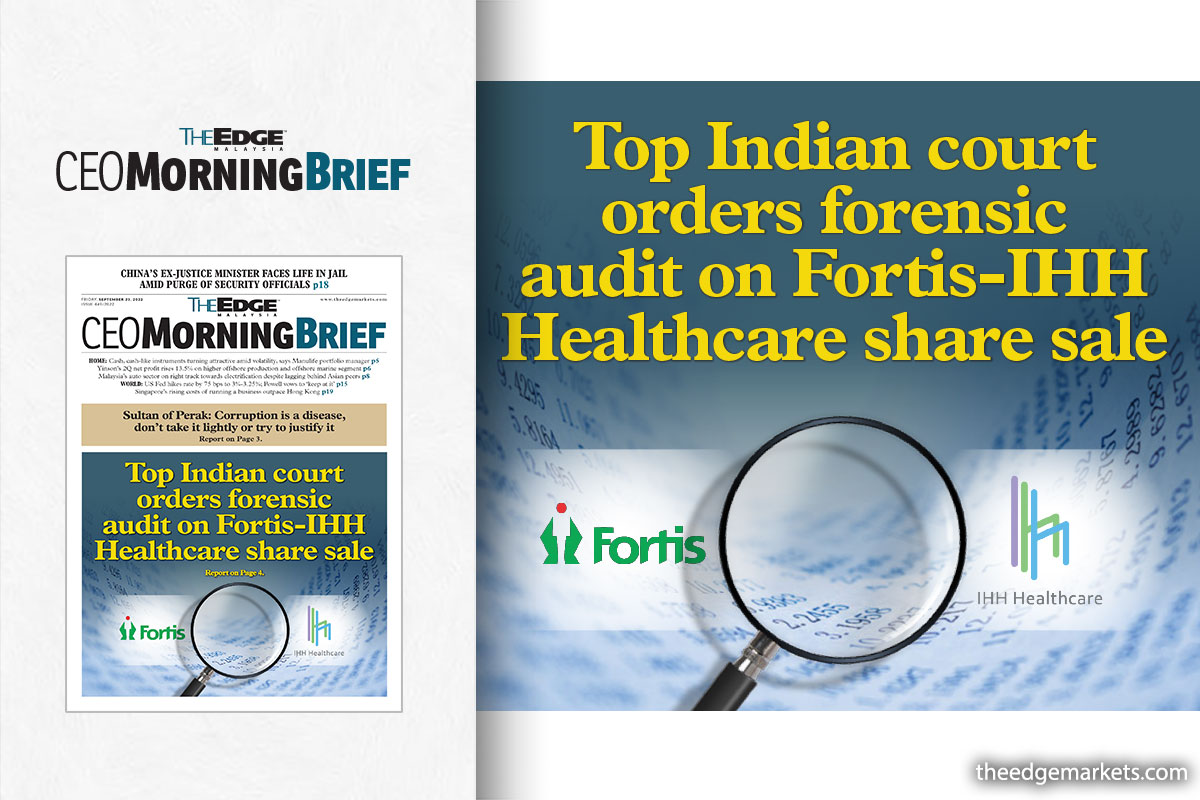 (Sept 22): India’s Supreme Court ordered a forensic audit of the share sale in Fortis Healthcare Ltd in 2018 and refused to allow the open offer from Malaysia’s IHH Healthcare Bhd to proceed, triggering a rout in Fortis’s stock.

A ruling by three judge-panel, headed by Chief Justice UU Lalit on Thursday sought a probe into sale of shares in Fortis by lenders and transfer of money to RHT Health Trust on a petition filed by Daiichi Sankyo Co. The Japanese drug maker had acquired a pharmaceutical firm in 2008 from Malvinder Singh and Shivinder Singh, who are also ex-owners of Fortis Healthcare.

A lower court will decide on whether the open offer for Fortis can be allowed based on the evidence it gets, the judges said. “Everything goes back to the executing court,” Justice Lalit said. A detailed copy of the ruling is awaited.

The court on Thursday also sentenced the Singh brothers to six months in jail on charges of contempt of court. Daiichi is seeking execution of US$500 million award in Delhi High Court against the Singh brothers, who are already in jail on separate fraud and money laundering charges.

Fortis’ shares plunged as much as 20% on Thursday, the most since February 2018, during trading in Mumbai after the court ruling.

The verdict further delays the takeover of the embattled Indian hospital chain company by Malaysia’s IHH that has already been pending for over three years. IHH acquired about a third of Fortis in 2018 to became its largest shareholder. The open offer for 26% more shares could have helped IHH fortify position in the company. After the first leg of the deal in August 2018, Fortis had embarked on a revamp with a cost-cutting campaign implemented by Chief Executive Officer Ashutosh Raghuvanshi.

The IHH-Fortis deal is stuck in the cross fire between Daiichi and Singh brothers who used to own Fortis. Daiichi had in 2016 won an arbitration award worth over US$500 million against the Singhs in the dispute around the sale of brothers’ generic drug making firm, Ranbaxy Laboratories Ltd, to Daiichi.

In 2018, when Indian lenders sold the Singh brothers’ pledged shares in Fortis to IHH, the Japanese drug maker objected and said the brothers had on oath assured that the Fortis shares will cover the award amount.

Fortis and the India’s capital market regulator had petitioned the court to lift the halt, arguing Daiichi’s recovery efforts are not affected by the open offer.

The court on Thursday said all cases, including insolvency petitions against companies owned by Singh brothers, will be allowed to proceed.