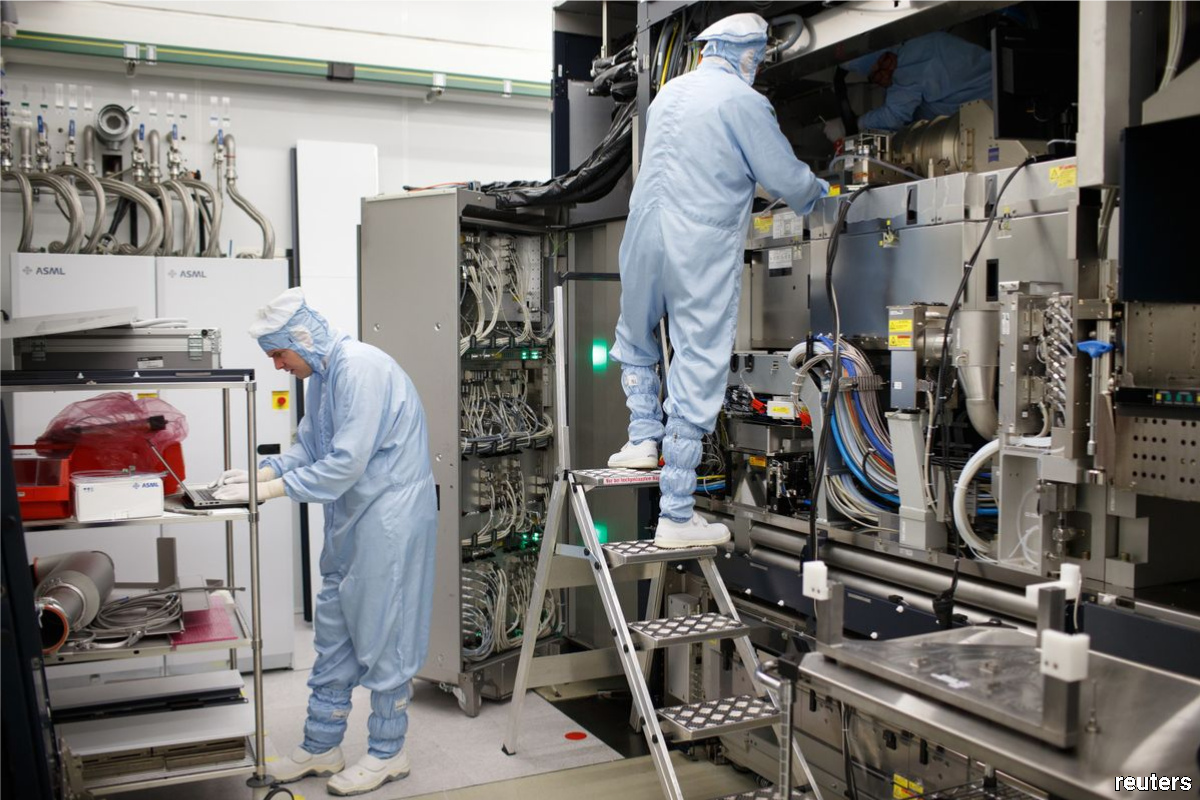 (July 6): The US is pushing the Netherlands to ban ASML Holding NV from selling to China mainstream technology essential in making a large chunk of the world’s chips, expanding its campaign to curb the country’s rise, according to people familiar with the matter.

Washington’s proposed restriction would expand an existing moratorium on the sale of the most advanced systems to China, in an attempt to thwart China’s plans to become a world leader in chip production. If the Netherlands agrees, it would broaden significantly the range and class of chipmaking gear now forbidden from heading to China, potentially dealing a serious blow to Chinese chipmakers from Semiconductor Manufacturing International Corp to Hua Hong Semiconductor Ltd.

American officials are lobbying their Dutch counterparts to bar ASML from selling some of its older deep ultraviolet lithography, or DUV, systems, the people said. These machines are a generation behind cutting-edge but still the most common method in making certain less-advanced chips required by cars, phones, computers and even robots.

Shares of ASML gained as much as 2.6% in Amsterdam on Wednesday. Its American Depository Receipts closed down 3.9% on Tuesday following Bloomberg’s initial report. Nikon Corp., a smaller rival to the Dutch firm in that sphere of chipmaking gear technology, closed down 5.1% in Tokyo on Wednesday.

The issue arose during US Deputy Commerce Secretary Don Graves’s visit to the Netherlands and Belgium in late May and early June to discuss supply chain issues, said the people, who asked not to be identified because the discussions were private. During that trip, Graves also visited ASML’s headquarters in Veldhoven and met chief executive officer Peter Wennink.

ASML’s sales could narrow by 5-10% if it’s banned from selling deep ultraviolet tools in China. As the chip equipment maker’s revenue already reflects a ban on extreme ultraviolet tool shipments to the country, it may experience less impact versus peers such as Applied Materials which derives 25-30% of its sales from China.

The Dutch government has yet to agree to any additional restrictions on ASML’s exports to Chinese chipmakers, which could hurt the country’s trade ties with China, the people said. ASML is already unable to ship its most advanced extreme ultraviolet, or EUV, lithography systems, which cost about 160 million euros (US$164 million) per unit, to China as it cannot obtain an export license from the Dutch government.

The US push on ASML comes as President Joe Biden separately considers easing some of the Trump-era tariffs on consumer goods from China. While China may welcome such a move at a time of tense relations between the two powers, Biden’s administration has continued his predecessor’s efforts to restrict China’s access to US technology.

The US Department of Commerce and the Dutch Ministry of Foreign Affairs declined to comment.

“The discussion is not new. No decisions have been made and we do not want to speculate or comment on rumors,” an ASML spokeswoman said.

ASML is the world’s top maker of lithography systems, machines that perform a crucial step in the process of creating semiconductors. ASML’s dominance of the market for that type of equipment means that further cutting China off from access to its products would undermine the Asian country’s ambitions to make itself more self-sufficient in production of the crucial electronic components.

“China’s share of the global chip-equipment market is negligible,” said Alex Capri, a research fellow at the Asia-based Hinrich Foundation, characterizing chip production as “a choke point” in China’s plans to bulk up its semiconductor muscle.

The older generation of machinery, DUV, is less capable than more advanced EUV lithography equipment but remains indispensable in manufacturing many of the types of chips that are currently experiencing acute shortages. Washington is focused on banning sales of the most advanced type of DUV technology, immersion lithography machines, the people said.

American officials are also trying to exert pressure on Japan to stop shipping the same technology to Chinese chipmakers, one of the people said. Japan’s Nikon competes with ASML in this area.

“We have no information regarding this matter,” a Nikon spokeswoman said.

Dutch Prime Minister Mark Rutte said in June he is against reconsidering trade relations with China and called for the EU to develop its own policies toward Beijing. China is the Netherlands’ third-biggest trade partner after Germany and Belgium.

ASML opposes a ban on sales of DUV lithography equipment to Chinese customers because it is already a mature technology, Wennink said earlier this year. Chinese-based facilities, run by either domestic or foreign companies, account for 14.7% of ASML’s total revenue in 2021, according to company disclosures and data compiled by Bloomberg.

US efforts to block the export of chipmaking equipment began under the Trump administration. Washington pressured the Dutch government to prevent sales of EUV lithography systems, which are required to produce the most sophisticated semiconductors and in which ASML has a monopoly.

Major US chip-equipment makers including Applied Materials Inc and Lam Research Corp are already banned from selling certain advanced products to SMIC due to national security concerns. The potential DUV ban could further hit SMIC and its Chinese peers.

“Lithography equipment is the most difficult equipment for China to replace when it comes to semiconductor production,” said Johnson Wang, an analyst at Taiwan Institute of Economic Research. “Without access to foreign DUV lithography equipment, the progress of China’s chip industry could come to a halt.” 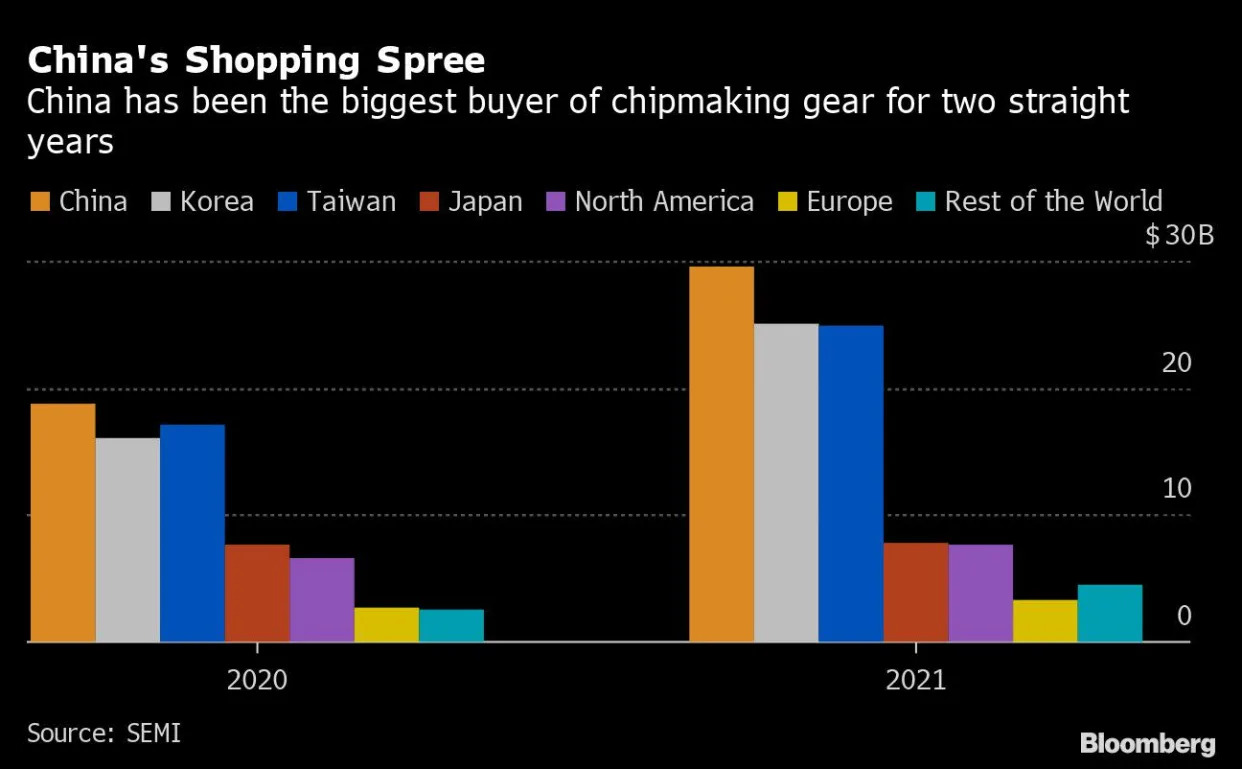