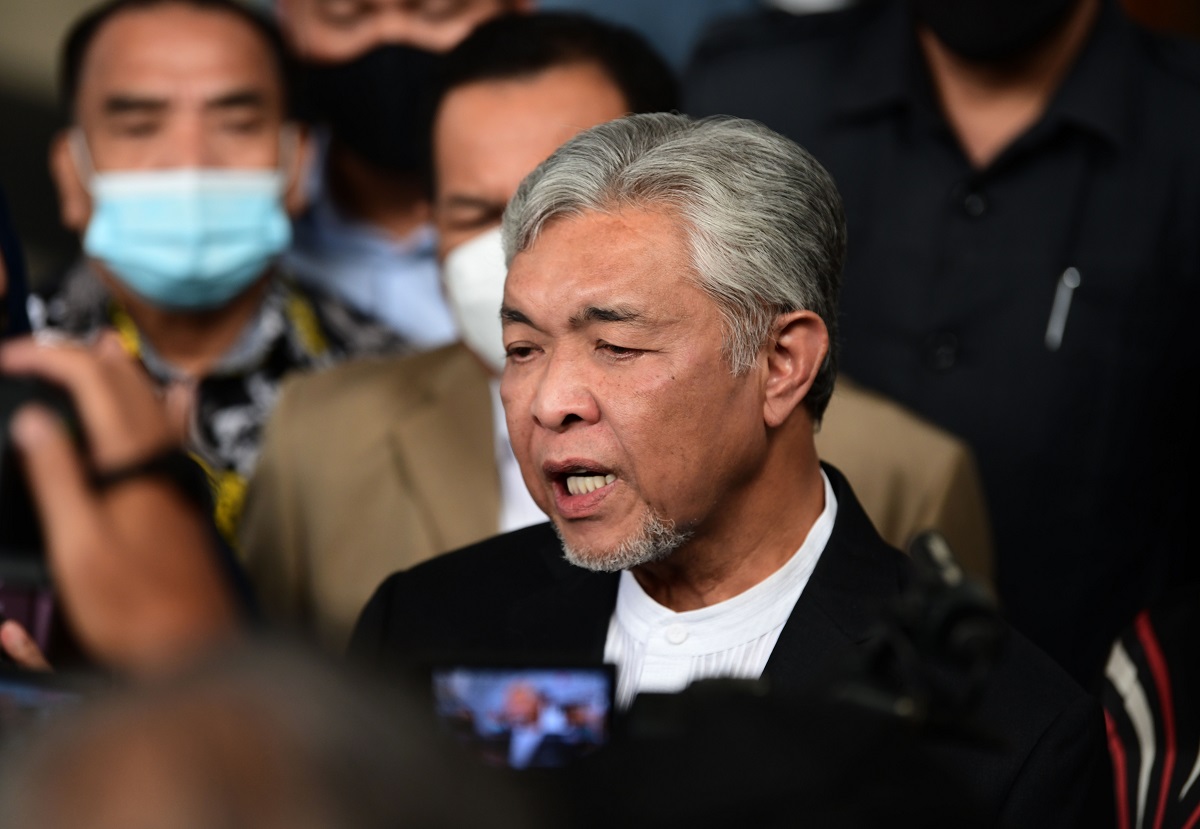 The Umno president is also on trial for seven other bribery charges in his capacity as home affairs minister then, being alleged to have obtained for himself bribes denominated in different currencies comprising S$1.15 million, RM3 million, €15,000 (RM67,032) and US$15,000 (RM67,548) from UKSB.

Judge Datuk Mohd Yazid Mustafa fixed the date after hearing oral submissions from the prosecution and the defence with regard to the case.

Mohd Yazid directed both parties to file in the notes from their five-day oral submissions by Sept 13, and the judge will decide whether there is a prima facie case or whether Zahid has a case to answer for in relation to all 40 graft charges on Sept 23.

Zahid's second trial began on May 24, 2021 with 19 prosecution witnesses testifying.

Earlier, the court heard submissions from the defence who continued to question the source of money allegedly paid by UKSB to Zahid.

The funds were said to have originated from Hong Kong or Labuan.

Lawyer Hamidi Mohd Noh said the prosecution's failure to call the Hong Kong witnesses had broken the purported money trail on whether it was truly UKSB that gave the money to the former home minister.

Hamidi said testimonies from the Hong Kong witnesses were needed to prove whether the money truly existed.

"If the source of the funds cannot be proven then the case should [be dropped]. It is not that there was a cheque for a certain amount was issued. There are also questions on whether Ahmad Zahid truly received the purported cash money as alleged," he said.

Hisyam said there were doubts about the testimonies given, as some facts appeared to have been omitted from the witness statements.

Prosecution says 'money did not fall from the sky'

The prosecution, led by Datuk Raja Rozela Raja Toran, contended that raising matters that were not put in witness statements was such a petty issue.

She maintained that the three witnesses came on their own accord to testify that money was given to Zahid.

"It is not as if the money had fallen from the seventh sky to them, but the fact [was that] UKSB directors Wan Quoris and Lee testified they gave the money to the accused and it originated from Hong Kong," she added.

She reiterated it was not necessary for the prosecution to prove or answer where the money came from.

"Nowhere [in testimonies] of Wan Quoris and Lee [did they deny] going to Ahmad Zahid's house to deliver the money every month. It is to be noted that upon receiving the money Tan had kept it in a safe [before making the delivery]," she added.

Meanwhile, deputy public prosecutor (DPP) Zander Lim Wai Keong, in response to the alleged political persecution against Zahid, said that the court had no jurisdiction to decide on this issue.

He said the defence was fully aware of the other recipients in the ledger that had been tendered as evidence before the commencement of the trial.

"They are fully aware, and the defence should have filed the challenge before the commencement of this trial and not claim it at the end of the prosecution stage," he added.

Lim further argued that the prosecution was not required to prove where the money came from as the plain reading of the charges indicated the accused had received gratification from UKSB.

Citing the Court of Appeal's decision with regard to former prime minister Datuk Seri Najib Razak's SRC International Sdn Bhd case, he said if the prosecution had to prove the source of the funds, it would be an unreasonable burden on them.

"We have to remember that this is a graft case and hence the money was paid in cash and this was done to avoid detection," he added.

Raja Rozela said that for all these reasons, the court should find a prima facie case against Zahid and defence should be called. Besides Raja Rozela and Lim, DPP Datuk Wan Shaharuddin Wan Ladin also appeared for the prosecution.

During the trial, it was revealed that UKSB had sourced the money from Maintech System HK Ltd and Visa Malaysia Ltd in Hong Kong.

Both representatives from the two companies have been offered to the defence, should Zahid's defence be called.